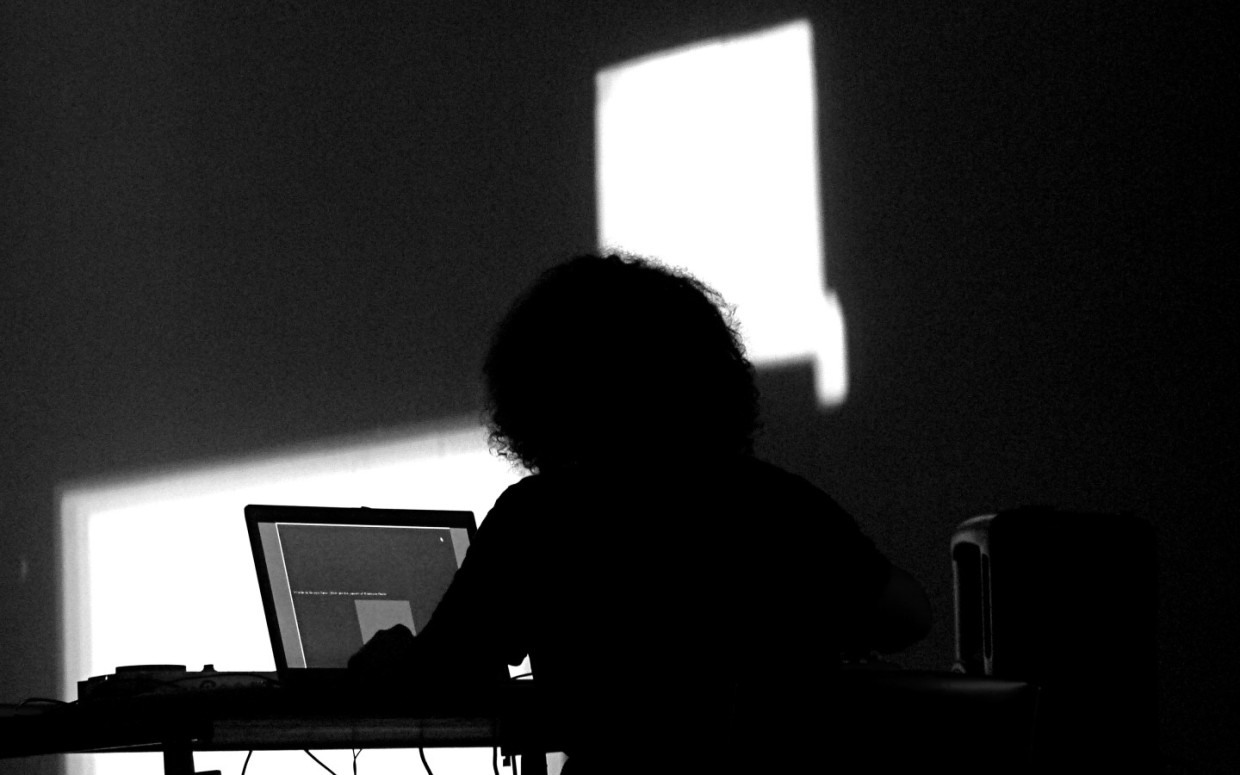 Enrique Tomás (Madrid, 1981) is a sound artist based on Linz, Austria. He started his musical studies at the age of 12 in Spain. In 2004, after finishing his MSc. in Telecommunications Engineering and becoming a dissident from academic composition academy, he started to exhibit his work.

He has been responsible for interactive sound art works like “Algorithmic Echolocation” exhibited at SONAR 05 Festival, Ars Electronica 2005, Observatori Festival 2006, Sevilla’s Contemporany Art Biennial 2008, etc. In 2005 he started to work for Medialab Madrid (known as Medialab Prado nowadays) for the production of media art works, exhibitions and events.

In 2007 he founded Atmosfera::Sustrato_Ruido, a Spanish guerrilla that uses only noise as material in architectural interventions and performances showed in Madrid and Sevilla in big venues at the public space.

In the last months of 2007 he got a Research Fellowship position in the Robotics Lab at the UC3M University in Madrid, developing some parts of the social robot Maggie, focusing in musical lenguaje possibilities for human to robot interaction.

Since August 2008 he lives in Linz, when he accepted and invitation for working in Futurelab Ars Electronica, developing a 30 channel sound installation for the composer Rupert Huber that will be permanently showed in the new terminal Viena’s Airport.

As an educator he has developed many workshops about computer music, interactive art and interfaces for musical expression in different institutions and festivals: Madrid, Helsinki, Linz, Berlin, Bergen, Mexico, Sevilla, Cuenca… In 2010 he founded the Labor Für Elektroakustische Musik und Neue Medien Linz that he coordinates and curates.

As a electroacustic music and sound art performer, as known as “ultranoise” he develops a career focusing on inmersive acoustic experiences, with extreme dynamic ranges and timbres on multichannel works. He has shown his noise in galleries, clubs and festivals in Spain, Mexico, Germany, Austria, Norwey, Finland, Sweden, Belgium and The Netherlands. Since 2008 he is part of the electroacustic music trio Endphase with the composers Alberto Bernal and Joao Pais. With Endphase he has played in multiple countries and future projects include installations&performances in Oslo, Berlin and Weimar.

Since October 2008 he decided to focus his work in locative audio, producing experimental urban soundscapes that are controlled by the physical location of the audience with the help of GPS systems. Regarding this project, he has presented this new work (called noTours.org ) as part of the sound art collective escoitar.org. noTours has been commisioned and presented by KUMU, S.M.A.K., La Casa Encendida, Laboral, NOVARS, WORM, Kunst Uni Linz, Sound Likes Mobility Conference, etc. during the years 2010 and 2011.

In 2009 he won the support of Foundation Phonos (Barcelona) and Madrid´s Council for the development of two new works: an experimental audioguide of Madrid and an electroacoustic work based on Hans Richter´s films that were produced in 2010. In 2010 we finished the production of the tactile robot “Peer2Peer” that uses sound and tactile feedback as communication and evolution, in collaboration with the artist Ursula Guttmann.

In June 2010 he presented his first retrospective of works in the Gallery of the City of Traun with 6 site specific installations inspired on older works. In this exhibition he presented “360º soundscapes”, “Ohrenzeuge”, “El Mirador”, “Traun Soundpostcards” and “The Gallery Sound Interface”.

At the end of 2010 he has worked on the project “Opticks” (opticks.info) commisioned by Daniela De Paulis for the composition of a live soundtrack for the live transmission of images to the Moon (and the later reception on the surface of the Earth). This project was persented in Extrapool in Nijmegen and in the Artis Planetarium of Amsterdam.

During the first half of 2011 Enrique Tomás focused on the project noTours (Estonia, Belgium, Netherlands, Austria and UK) and in the preparation of new performances and installations for 2012.

Since 2012 he is a PhD Candidate at the University of Art and Industrial Design of Linz, Austria.  He focuses on Electronic Music Instruments Design embodying Composition and Performance.

Enrique Tomás has been artist in residence in Rotterdam (b.a.d stichting), in Barcelona (Phonos) and in Seydisfjördur – Iceland (Skálar).

Since 2008 he is an active editor of mediateletipos.net. He curated in 2009 the Arte Sons experimental music festival of Lugo and since 2011 the sound art program “Soundscapes” in Linz among other smaller events.